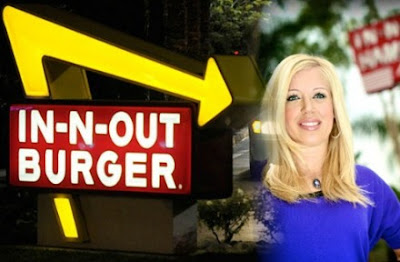 By Seth Lubove | Bloomberg
Lunchtime at the flagship In-N-Out Burger restaurant in Baldwin Park, California, is a study in efficiency. As the order line swells, smiling workers swoop in to operate empty cash registers. Another staffer cleans tables, asking customers if they're enjoying their hamburger. Outside, a woman armed with a hand-held ordering machine speeds up the drive-through line.
Such service has helped In-N-Out create a rabid fan base -- and make Lynsi Torres, the chain's 30-year-old owner and president, one of the youngest female billionaires on Earth. New store openings often resemble product releases from Apple Inc. (AAPL), with customers lined up hours in advance. City officials plead with the Irvine, California-based company to open restaurants in their municipalities.
"They have done a fantastic job of building and maintaining a kind of cult following," said Bob Goldin, executive vice president of Chicago-based food industry research firm Technomic Inc. "Someone would love to buy them."
That someone includes billionaire investor Warren Buffett, who told a group of visiting business students in 2005 that he'd like to own the chain, according to an account of the meeting on the UCLA Anderson School of Management website.
The thrice-married Torres has watched her family expand In- N-Out from a single drive-through hamburger stand founded in 1948 in Baldwin Park by her grandparents, Harry and Esther Snyder, into a fast-food empire worth more than $1 billion, according to the Bloomberg Billionaires Index.
Biblical Citations
Famous for its Double-Double cheeseburgers, fresh ingredients and discreet biblical citations on its cups and food wrappers, In-N-Out has almost 280 units in five states. The closely held company had sales of about $625 million in 2012, after applying a five-year compound annual growth rate of 4.6 percent to industry trade magazine Nation's Restaurant News's 2011 sales estimate of $596 million.
In-N-Out is valued at about $1.1 billion, according to the Bloomberg ranking, based on the average price-to-earnings, enterprise value-to-sales and enterprise value-to-earnings before interest, taxes, depreciation and amortization multiples of five publicly traded peers: Yum! Brands Inc. (YUM), Jack in the Box Inc., Wendy's Co. (WEN), Sonic Corp. (SONC) and McDonald's Corp. (MCD) Enterprise value is defined as market capitalization plus total debt minus cash.
One private equity executive who invests in the food and restaurant industry said the operation could be valued at more than $2 billion, based on its productivity per unit, profitability and potential for expansion. The person asked not to be identified because he is not authorized to speak about his company's potential investments.
Plane Crash
"In-N-Out Burger is a private company and this valuation of the company is nothing more than speculation based on estimates from people with no knowledge of In-N-Out's financials, which are and always have been private," Carl Van Fleet, the company's vice president of planning and development, said in an e-mailed statement.
Torres, who has never appeared on an international wealth ranking and declined to comment for this article, came to control In-N-Out after several family deaths. When her grandfather Harry died in 1976, his second son, Rich, took over as company president and expanded the chain to 93 restaurants from 18.
Torres's father, Harry Guy Snyder, became chief executive following Rich's 1993 death in a plane crash at age 41. The chain expanded to 140 locations under Guy, who inherited his father's passion for drag racing.
Ford Cobra
When he died of a prescription drug overdose at age 49 in 1999, Snyder's estate included 27 cars and other vehicles, including a 1965 Ford Cobra and a pair of 1960's-era Dodge Dart muscle cars, according to his will.
Torres's grandmother Esther -- Harry's widow -- maintained control of the company until her death in 2006 at age 86. When she died, Torres was the sole family heir. She now controls the company through a trust that gave her half ownership when she turned 30 last year, and will give her full control when she turns 35. The company has no other owners, according to an Arizona state corporation commission filing.
Few in the restaurant industry have met or know much about the hamburger heiress.
"I have no clue about her," said Janet Lowder, a Rancho Palos Verdes, California, restaurant consultant, who said she was one of the few people to extract the company's internal finances from Esther Snyder in the 1980's for industry-wide surveys. "I was even surprised there was a granddaughter."
Limited Menu
Torres has little formal management training and no college degree. The company was structured to carry on after the demise of its founders, according to a 2003 Harvard Business School case study. In-N-Out has never franchised to outside operators, the Harvard researchers said, giving up a low-cost revenue stream in exchange for maintaining quality control.
In a 2005 article in the Harvard Business Review, Boston- based Bain & Co. consultants Mark Gottfredson and Keith Aspinall attributed the company's estimated 20 percent profit margins at the time to the simplicity of its limited menu. Contrast that with competitors such as Oak Brook, Illinois-based McDonald's and Miami-based Burger King Worldwide Inc. (BKW), which regularly change their food offerings.
"Other chains seem to change positions as often as they change their underwear," said Bob Sandelman, chief executive officer of San Clemente, California-based food industry researcher Sandelman & Associates. Tolong Share ya ^^