Jack Curran dies, due to lung and kidney problems 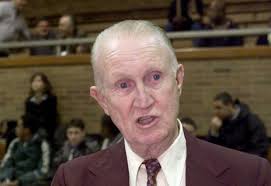 Jack Curran dies at 83, Jack Curran, who spent more than a half century at Archbishop Molloy High School and was among the nation's winningest prep coaches in basketball and baseball, has died.

His death was confirmed Thursday by the Queens school. The family has yet to release further information, the school said.

Curran had been weakened by lung and kidney problems. He broke his kneecap last month when he slipped on ice while on his way to church. The mishap did not prevent him from attending church that day.

Curran coached 55 years at the school. In 1958, he became the basketball coach at what was then St. Ann's Academy. He succeeded Lou Carnesecca, who left to coach St. John's.

NBA players Brian Winters, Kevin Joyce, Kenny Smith and Kenny Anderson played under Curran at Archbishop Malloy. Curran was the winningest coach in New York state, with 972 victories in basketball and 1,708 in baseball.

He lauded Curran for focusing not just on a player's athletic ability but on his "mind, body and spirit" as well.

"He was a hard worker and worked his team very hard," Karsten said. "He had the respect of so many young players and the older players would come back to see him."

Athletic director Mike McCleary, who worked with Curran for 15 years, said the coach "carried himself with class."

"He taught everybody how to behave by example," he said.

Curran is the only high school coach in the New York state Hall of Fame in both basketball and baseball, Karsten said.

Curran, who lived in Rye, N.Y., was a star college athlete at St. John's who went on to play minor league baseball for the Dodgers and Phillies.
Tolong Share ya ^^